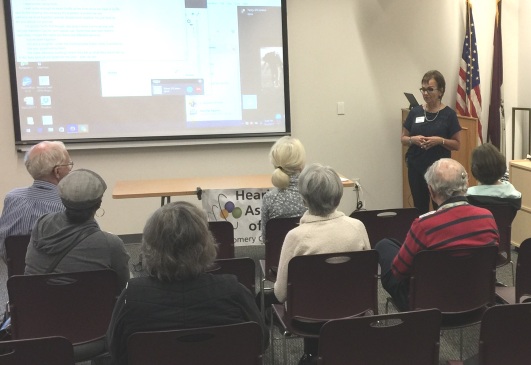 Cheryl Deitz, Hamilton Captel Outreach Coordinator  spoke to 10 attendees at our October 2 meeting. She discussed the history of Relay Service, and had demo models of several phones.  One model has Bluetooth capability, which is almost universal in cell phones, but rare in landline phones.

She also discussed captioning for smartphones, PC, laptops or tablets.

One topic that was unfamiliar to most of us was Speech-to-Speech, an interpreting service for those with speech disability.  A Communication Assistant specially trained in understanding those with a speech disability repeats the caller’s words to the party being called.  This is typically a stroke or cerebral palsy victim, but may also be useful to those whose speech disability is a consequence of prelingual hearing loss.

At our November 6 meeting, Diana Bender will speak about OTCHA – Over the Counter Hearing Aids.  More details later on this site

This entry was posted in Meetings. Bookmark the permalink.